Back in October we were very privileged to have been asked to provide aerial filming for a climate change film “A Seat At The Table”.

Probably our most visible aerial filming role yet and to be shown over YouTube and at the climate change conference in Glasgow to world political leaders this November.

“Thank you so much for your involvement and contribution in helping make this series a success!”

Join Jack Harries as he journeys to the 2021 UN Climate Change Conference in Glasgow. Along the way, he’ll be speaking with those who don’t have a seat at the political table – those who’ve done the least to cause this climate issue but who are feeling the effects the hardest – and taking their stories to the world leaders at COP26. Guest-starring Sir David Attenborough, Jane Goodall, Jamal Edwards, Poppy Okotcha, Simon Amstell and more. #SeatAtTheTable 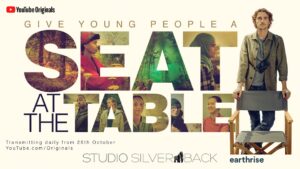 Studio Silverback are proud to announce “A Seat At The Table” will be transmitting daily from 25th October 2021 on YouTube Originals.

Documentary maker and climate activist Jack Harries will film a new YouTube Originals series Seat at the Table during a 100-day trip, which begins today.

Seat at the Table, made by Studio Silverback, aims to paint a truly global picture of the climate emergency facing our world.

The low-carbon journey will see Harries travel by bike, boat, and train from the Southern tip of the UK before ending in November in Glasgow at the most important global climate change meeting in history – COP26.

The trip will culminate with his mission to present a film featuring under-represented young people around the world, sharing their hopes and realities from the front lines of climate change to Prime Minister Boris Johnson and other world leaders.

Harries will begin his journey by interviewing Sir David Attenborough about climate change and the great threat that it poses to our planet.

On each leg of his journey, Harries will meet experts and speak to young people from around the globe who are experiencing the impacts of climate change, some of whom are developing innovative solutions. They will outline the effect of the changing climate in their respective countries, arming Harries with footage to show to some of the most powerful people on the planet at COP26.

As Harries travels he will explore some of the less discussed issues around climate change such as equality, food and mental health and how each one is specifically impacted by climate change.

In the UK Harries will begin in The Isles of Scilly which are threatened by rising sea levels whilst speaking to a climate activist on the other side of the world in the Maldives where they are experiencing the same issue but in a much more urgent timeframe.

In Devon and Brighton, he will explore the future of food, in London he will hear about the impacts of fossil fuels on air pollution. He’ll visit Cumbria to understand the effects of devastating wildfires now sweeping the globe, and in the North Sea he will meet communities at the heart of the transition from fossil fuels to clean energy. And lastly, he will arrive in Glasgow for COP26.

Along his journey he will be connecting with young climate change allies in Thailand, India, Africa, Morocco, and Greenland to hear about their similar experiences and reveal that whilst climate change is starting to become a reality for those of us in wealthy nations, it is already an emergency for many around the world.

Seat At The Table will premiere on YouTube Originals in October.

POWERING UP FOR THE HOLIDAYS!